A 9-patch image file is a specially formatted file so that Android knows which areas/portions of the image can or cannot be scaled. It breaks your image into a 3x3 grid. The corners remain unscaled, the sides are scaled in one direction and the center is scaled in both dimensions. 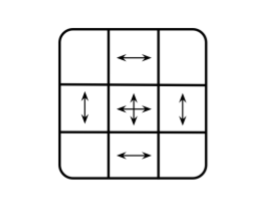 A Nine Patch (9-Patch) image is a bitmap that has a single pixel wide border around the entire image. Ignoring the 4 pixels in the corners of the image. This border provides metadata for the bitmap itself. Bounds are marked by solid black line(s).

A Nine Patch image is stored with the extension .9.png.

The padding borders are usually used to determine where text is to be drawn.

There is an excellent tool provided by Google that greatly simplifies the creation of these files.

Located in the Android SDK: android-sdk\tools\lib\draw9patch.jar

The key to correctly stretching is in the top and left border.

This example creates rounded corners suitable for a Toast.

The parts of the image that are below the top border and to the right of the left border will expand to fill all unused space.

This example will stretch to all combinations of sizes, as shown below:

The Spinner can be reskinned according to your own style requirements using a Nine Patch.

As an example, see this Nine Patch:

As you can see, it has 3 extremely small areas of stretching marked.

The top border has only left of the icon marked. That indicates that I want the left side (complete transparency) of the drawable to fill the Spinner view until the icon is reached.

The left border has marked transparent segments at the top and bottom of the icon marked. That indicates that both the top and the bottom will expand to the size of the Spinner view. This will leave the icon itself centered vertically. 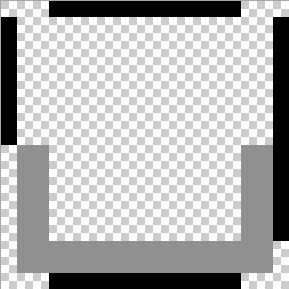