In Ansible, a playbook is is a YAML file containing the definition of how a server should look. In a playbook you define what actions Ansible should take to get the server in the state you want. Only what you define gets done.

This is a basic Ansible playbook that installs git on every host belonging to the web group:

The format of a playbook is quite straightforward, but strict in terms of spacing and layout. A playbook consists of plays. A play is a combination of targets hosts and the tasks we want to apply on these hosts, so a drawing of a playbook is this: 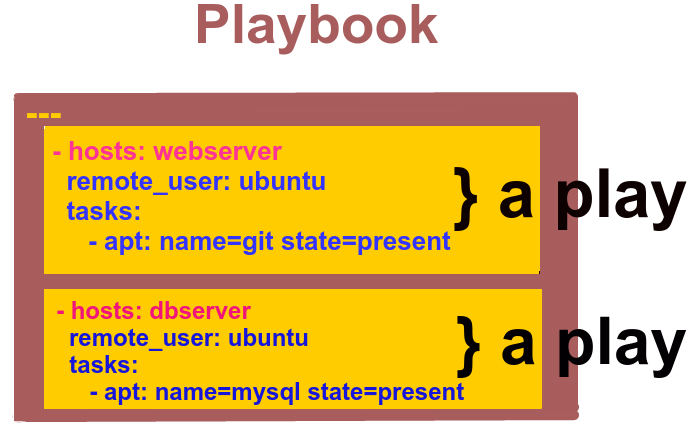 To execute this playbook, we simply run:

As we said earlier, every play must contain:

Think of a play as the thing that connects hosts to tasks. In addition to specifying hosts and tasks, plays also support a number of optional settings. Two common ones are:

Play contains several tasks, which can be tagged:

Task with tag 'vim' will run when 'vim' is specified in tags. You can specify as many tags as you want. It is useful to use tags like 'install' or 'config'. Then you can run playbook with specifying tags or skip-tags. For

By default Ansible run all tags