autofac Getting started with autofac

Autofac is an IoC container for Microsoft .NET 4.5, Silverlight 5, Windows Store apps, and Windows Phone 8 apps. It manages the dependencies between classes so that applications stay easy to change as they grow in size and complexity. This is achieved by treating regular .NET classes as components.

From Wikipedia:
In software engineering, inversion of control (IoC) is a design principle in which custom-written portions of a computer program receive the flow of control from a generic framework. A software architecture with this design inverts control as compared to traditional procedural programming: in traditional programming, the custom code that expresses the purpose of the program calls into reusable libraries to take care of generic tasks, but with inversion of control, it is the framework that calls into the custom, or task-specific, code.

In the NuGet-Solution tab, type in "Autofac" in the search box. Make sure you are in the "Browse" section. Install the first option as shown in the image below (take note of the marked regions in the image): 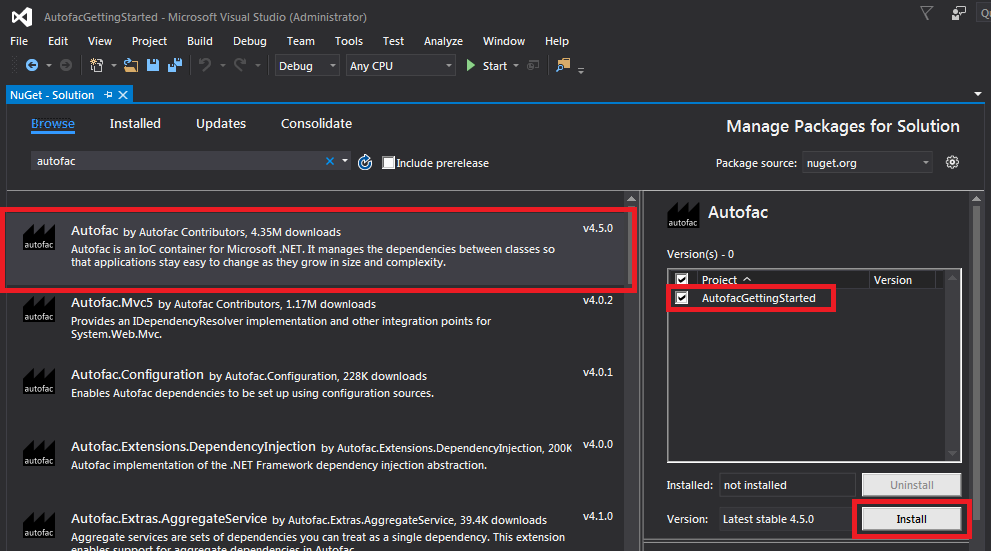 Installing through NuGet will automatically add Autofac in the References of the projects which were selected during installation.

Take a look at the official documentation.

This example will show how get started with Inverion of Control using Autofac with a relatively simple project, closely following the official getting started docs.

For simplicity, the using statements and namespaces are not shown.

So far the code has been plain and simple. Lets get to the part where automatic dependency injection takes place, which of course is being done by Autofac!

Replace the Program class in Program.cs file with this code (Program class is automatically created by Visual Studio at project creation. If it doesn't exist, go ahead and create one):

When run, the output should be the current date in the console. You have successfully used Autofac in your project to inject dependencies automatically.

Here is what's going on under the hood: