It is essential to keep in mind that as y increases in SVG, the shapes move down.

Let’s say we’re going to create a scatterplot with each point correspondent to a x value and y value. To scale the value, we need to set the domain and the range like this:

However, if you just keep the settings like this, the points will be based on the top horizontal edge instead of the bottom horizontal line as what we expected.

The nice thing about d3 is that you can easily change this by a simple adjustment in domain setting:

<rect> represents rectangle, apart from aesthetic properties like stroke and fill, rectangle shall be defined by location and size.

Continue with the first scenario, the y axes, but this time, let’s try to draw a bar chart.

Assuming the y scale setting is the same, the y axis is properly set as well, the only difference between the scatterplot and this bar chart is that, we need to specify the width and the height, particularly the height. To be more specific, we’ve already got the ‘starting point’, the rest is to use things like for the height:

<svg> element is the root element, or the canvas as we are drawing charts on it.

SVG elements can be nested inside each other, and in this way, SVG shapes can be grouped together, meanwhile, all shapes nested inside an element will be positioned relative to its enclosing element.

One thing might need mentioning is that, we can’t nest inside another , it won’t work.

For example, this multiple donuts chart is made up by multiple elements, which contains a donut chart respectively. This can be achieved by using the element, but in this case where we only want to put donut chart one by one next to each other, is more convenient.

One thing to bear in mind is that we can’t use transform attribute on nevertheless we can use x, y for position.

SVG doesn’t currently support automatic line breaks or word wrapping, that’s when comes to rescue. element positions new lines of text in relation to the previous line of text. And by using dx or dy within each of these spans, we can position the word in relation to the word before it.

For example, when we want to add an annotation on y Axe:

This is a relatively common mistake: You created an rect element, in a bar chart for instance, and you want to add a text label (let's say, the value of that bar). So, using the same variable that you used to append the rect and define its x and y position, you append your text element. Very logic, you may think. But this will not work.

How does this mistake occur?

Which gives us this result: 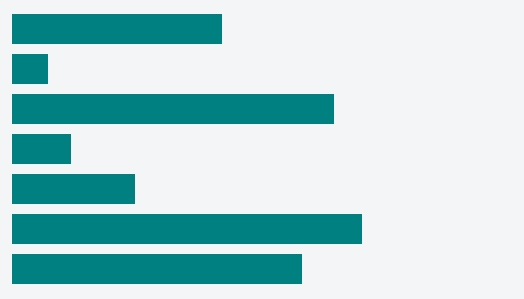 But you want to add some text elements, maybe a simple value to each bar. So, you do this:

And, voilà: nothing happens! If you doubt it, here is the fiddle.

If you inspect the SVG created by this last code, you're gonna see this:

And at this point a lot of people say: "But I'm seeing the text tag, it's appended!". Yes, it is, but this doesn't mean it will work. You can append anything! See this, for example:

It will give you this result:

But you don't expect any result just because the tag is there, do you?

Learn what SVG elements can hold children, reading the specifications. In our last example, the code doesn't work because rect elements cannot contain text elements. So, how to display our texts?

Create another variable, and append the text to the SVG:

And this is the outcome: 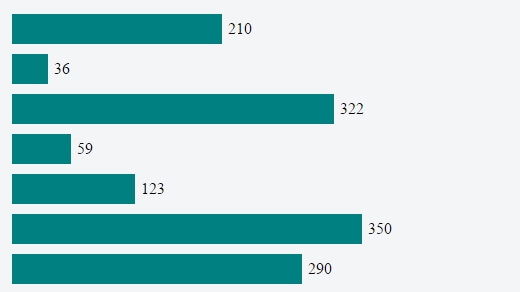 And here is the fiddle.

This is something that can be frustrating: you make a visualisation using D3.js but the rectangle you want on top is hidden behind another rectangle, or the line you planned to be behind some circle is actually over it. You try to solve this using the z-index in your CSS, but it doesn't work (in SVG 1.1).

So, suppose that we have this SVG:

He have four circles. The blue circle is the first one "painted", so it will be bellow all the others. Then we have the yellow one, then the red one, and finally the green one. The green one is the last one, and it will be on the top.

This is how it looks:

Changing the order of SVG elements with D3

So, is it possible to change the order of the elements? Can I make the red circle in front of the green circle?

But we can dynamically change the order of the elements, even after they were painted. There are several plain JavaScript functions that you can write to do this, but D3 has already 2 nice features, selection.raise() and selection.lower().

According to the API:

So, to show how to manipulate the order of the elements in our previous SVG, here is a very small code:

What does it do? It selects all the circles and, when the user hover over one circle, it selects that particular circle and brings it to the front. Very simple!

And here is the JSFiddle with the live code.