A real world example using a scientific experiment where certain routines are performed on different types of tissue. The class contains two functions by default to get the tissue or routine separately. In a later version we have then adapted it using a new class to add a function that gets both. This means we have not edited the original code and therefore do not run any risk of breaking our existing class (and no retesting).

Lets assume that in your current codebase, there exists MyLogger interface like so:

Lets say that you've created a few concrete implementations of these, such as MyFileLogger and MyConsoleLogger.

You have decided that you want to use a framework for controlling your application's Bluetooth connectivity. This framework contains a BluetoothManager with the following constructor:

The BluetoothManager also accepts a logger, which is great! However it expects a logger of which the interface was defined by the framework and they have used method overloading instead of naming their functions differently:

You already have a bunch of MyLogger implementations that you would like to reuse, but they do not fit the interface of the FrameworkLogger. This is where the adapter design-pattern comes in:

A great existing example of the Adapter pattern can be found in the SWT MouseListener and MouseAdapter classes.

The MouseListener interface looks as follows:

Now imagine a scenario where you are building a UI and adding these listeners, but most of the time you don't care about anything other than when something is single clicked (mouseUp). You wouldn't want to constantly be creating empty implementations:

Instead, we can use MouseAdapter:

By providing empty, default implementations, we are free to override only those methods which we care about from the adapter. Following from the above example:

To make the use of the adapter pattern and the kind of situation when it may be applied more imaginable, a small, simple and very concrete example is given here. There will be no code in here, just UML and a description of the example situation and its problem. Admittedly, the UML content is written like Java. (Well, the hint text said "Good examples are mostly code", I think design patterns are abstract enough to be introduced in a different way, too.)

In general, the adapter pattern is an adequate solution for a situation when you have incompatible interfaces and none of them can be directly rewritten.

Imagine you're running a nice little pizza delivery service. Customers can order online on your website and you have small system using a class Pizza to represent your pizzas and calculate bills, tax reports and more. The price of your pizzas is given as a single integer representing the price in cent (of the currency of your choice). 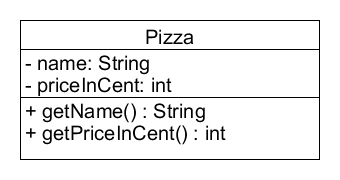 Your delivery service is working out great, but at some point you cannot handle the growing number of customers on your own anymore but you still want to expand. You decide to add your pizzas to the menu of a big online meta delivery service. They offer a lot of different meals — not only pizzas — so their system makes more use of abstraction and has an Interface IMeal representing meals coming along with a class MoneyAmount representing money. 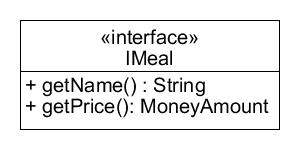 MoneyAmount consists of two integers as input, one for the amount (or some random currency) before the comma, and one for the cent amount from 0 to 99 after the comma; 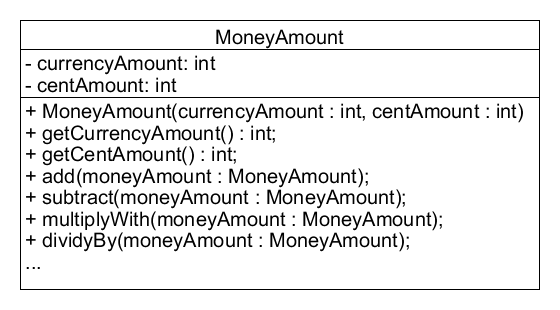 Due to the fact that the price of your Pizza is a single integer representing the total price as an amount of cent (> 99), it is not compatible with IMeal. This is the point where the adapter pattern comes into play: In case it would take too much effort to change your own system or create a new one and you have to implement an incompatible interface, you may want to apply the adapter patttern.

There are two ways of applying the pattern: class adapter and object adapter.

Both have in common that an adapter (PizzaAdapter) works as some kind of translator between the new interface and the adaptee (Pizza in this example). The adapter implements the new interface (IMeal) and then either inherits from Pizza and converts its own price from one integer to two (class adapter)

or has an object of type Pizza as an attribute and converts the values of that (object adapter).

By applying the adapter pattern, you will kind of "translate" between incompatible interfaces.