A Caesar cipher is one of the simplest and most widely known encryption techniques. The names comes from Julius Caesar, who, according to Suetonius, used it with a shift of three to protect messages of military significance

Encyption happens by replacing each letter of the alfabet with an other letter. The keys can be showed with this circle. Here is a shift of 8 chars used. 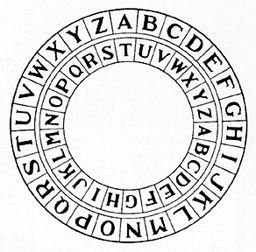 Here will the A replaced by T, B by U, C by V etc. So will next string encrypted:

Decription happens by the same cicle showed in the encryption example. Example:

Ceasar ciphers are easy to hack. If you know that an encrypted A is equal to H and a P is equal to I, everything with the same encryption key could be encrypted.