This topic consists of a wide variety of useful tips and tricks discovered by SO users through their experience in coding. These are often examples of ways to circumvent common frustrations or ways of using Excel in a more "clever" way.

Worksheets in excel have three options for the Visible property. These options are represented by constants in the xlSheetVisibility enumeration and are as follows:

Very Hidden sheets, on the other hand, are only accessible through the Visual Basic Editor. This makes them an incredibly useful tool for storing data across instances of excel as well as storing data that should be hidden from end users. The sheets can be accessed by named reference within VBA code, allowing easy use of the stored data.

To manually change a worksheet's .Visible property to xlSheetVeryHidden, open the VBE's Properties window (F4), select the worksheet you want to change and use the drop-down in the thirteenth row to make your selection. 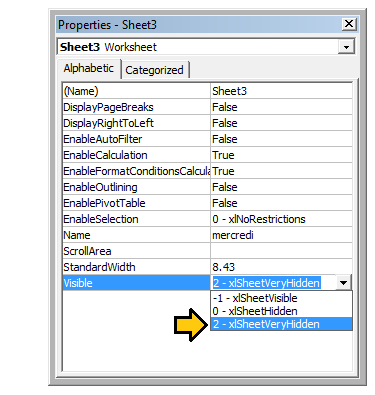 ¹ Both xlVeryHidden and xlSheetVeryHidden return a numerical value of 2 (they are interchangeable).

We know that 'best practise' dictates that a range object should have its parent worksheet explicitly referenced. A worksheet can be referred to by its .Name property, numerical .Index property or its .CodeName property but a user can reorder the worksheet queue by simply dragging a name tab or rename the worksheet with a double-click on the same tab and some typing in an unprotected workbook.

If you had used either of the following worksheet reference methods, your code would now be broken.

Both the original order and the original worksheet name have been compromised. However, if you had used the worksheet's .CodeName property, your sub procedure would still be operational 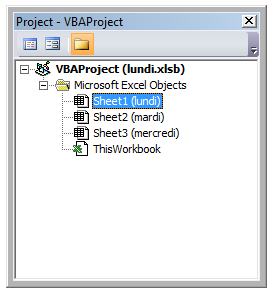 While it is uncommon to rename a .CodeName, it is not impossible. Simply open the VBE's Properties window ([F4]). 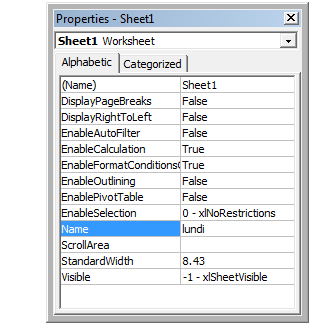 Using Strings with Delimiters in Place of Dynamic Arrays

Using Dynamic Arrays in VBA can be quite clunky and time intensive over very large data sets. When storing simple data types in a dynamic array (Strings, Numbers, Booleans etc.), one can avoid the ReDim Preserve statements required of dynamic arrays in VBA by using the Split() function with some clever string procedures. For example, we will look at a loop that adds a series of values from a range to a string based on some conditions, then uses that string to populate the values of a ListBox.

The Delimiter string itself can be set to any value, but it is prudent to choose a value which will not naturally occur within the set. Say, for example, you were processing a column of dates. In that case, using ., -, or / would be unwise as delimiters, as the dates could be formatted to use any one of these, generating more data points than you anticipated.

Note: There are limitations to using this method (namely the maximum length of strings), so it should be used with caution in cases of very large datasets. This is not necessarily the fastest or most effective method for creating dynamic arrays in VBA, but it is a viable alternative.

By default, Shapes in Excel do not have a specific way to handle single vs. double clicks, containing only the "OnAction" property to allow you to handle clicks. However, there may be instances where your code requires you to act differently (or exclusively) on a double click. The following subroutine can be added into your VBA project and, when set as the OnAction routine for your shape, allow you to act on double clicks.

This routine will cause the shape to functionally ignore the first click, only running your desired code on the second click within the specified time span.

This subroutine is a quick example on how to allow a user to select multiple files and then do something with those file paths, such as get the file names and send it to the console via debug.print.