HTTP Getting started with HTTP

Hypertext Transfer Protocol (HTTP) uses a client-request/server-response model. HTTP is a stateless protocol, which means it does not require the server to retain information or status about each user for the duration of multiple requests. However, for performance reasons and to avoid TCP' connection-latency issues, techniques like Persistent, Parallel or Pipelined connections may be used. 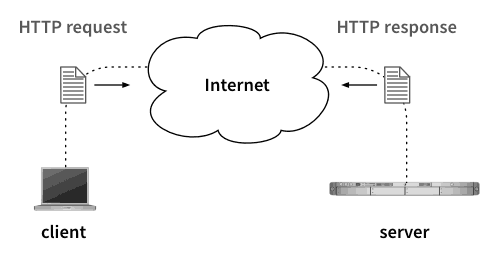 HTTP/1.0 does not have some features that are today de-facto required on the Web, such as the Host header for virtual hosts.

However, HTTP clients and servers sometimes still declare they use HTTP/1.0 if they have incomplete implementation of the HTTP/1.1 protocol (e.g. without chunked transfer encoding or pipelining), or compatibility is considered more important than performance (e.g. when connecting to local proxy servers).

HTTP/1.1 has originally been specified in 1999 in RFC 2616 (protocol) and RFC 2617 (authentication), but these documents are now obsolete and should not be used as a reference:

Don’t use RFC2616. Delete it from your hard drives, bookmarks, and burn (or responsibly recycle) any copies that are printed out.

The up-to-date specification of HTTP/1.1, that matches how HTTP is implemented today, is in new RFCs 723x:

HTTP/1.1 added, among other features:

HTTP/1.1 tried to introduce pipelining, which allowed HTTP clients to reduce request-response latency by sending multiple requests at once without waiting for responses. Unfortunately, this feature was never correctly implemented in some proxies, causing pipelined connections to drop or reorder responses.

This reduced overhead of requests, and enabled receiving of multiple responses simultaneously over a single TCP/IP connection.

Despite big changes in the data format, HTTP/2 still uses HTTP headers, and requests and responses can be accurately translated between HTTP/1.1 and 2.

The first version of HTTP that came into existence is 0.9, often referred to as "HTTP As Implemented." A common description of 0.9 is "a subsect of the full HTTP [i.e. 1.0] protocol." However, this greatly fails to illustrate the disparity in capabilities between 0.9 and 1.0.

Neither requests nor responses in 0.9 feature headers. Requests consist of a single CRLF-terminated line of GET, followed by a space, followed by the requested resource URL. Responses are expected to be a single HTML document. The end of said document is marked by dropping the connection server-side. There are no facilities to indicate success or failure of an operation. The only interactive property is the search string which is closely tied to the <isindex> HTML tag.

Usage of HTTP/0.9 is nowadays exceptionally rare. It is occasionally seen on embedded systems as an alternative to tftp.