jenkins Getting started with jenkins

Jenkins is an open source continuous integration tool written in Java. The project was forked from Hudson after a dispute with Oracle.

Jenkins provides continuous integration services for software development. It is a server-based system running in a servlet container such as Apache Tomcat. It supports SCM tools including AccuRev, CVS, Subversion, Git, Mercurial, Perforce, Clearcase and RTC, and can execute Apache Ant and Apache Maven based projects as well as arbitrary shell scripts and Windows batch commands. The primary developer of Jenkins is Kohsuke Kawaguchi. Released under the MIT License, Jenkins is free software.

Builds can be started by various means, including being triggered by commit in a version control system, by scheduling via a cron-like mechanism, by building when other builds have completed, and by requesting a specific build URL.

Jenkins is (and still is) a continuous integration (CI) system that allows automation of software development process, such as building code on SCM commit triggers. However the growing need for continuous delivery (CD) has requested that Jenkins evolves for a pure CI system to a mix of CI and CD. Also, the need to undustrialize Jenkins jobs has been growing and classic Jenkins 1.x Freestyle/Maven jobs started to be too limited for certain needs.

Under Jenkins 1.x a plugin called workflow-plugin appeared to allow developers to write code to describe jobs. Jenkins 2 goes further by adding built-in support for Pipeline as Code. The main benefit is that pipelines, being Groovy scripts files, can be more complex than UI-configured freestyle jobs and can be version-controlled. Jenkins 2 also adds a new interface that makes it easy to visualize different "stages" defined in a pipeline and follow the progress of the entire pipeline, such as below : 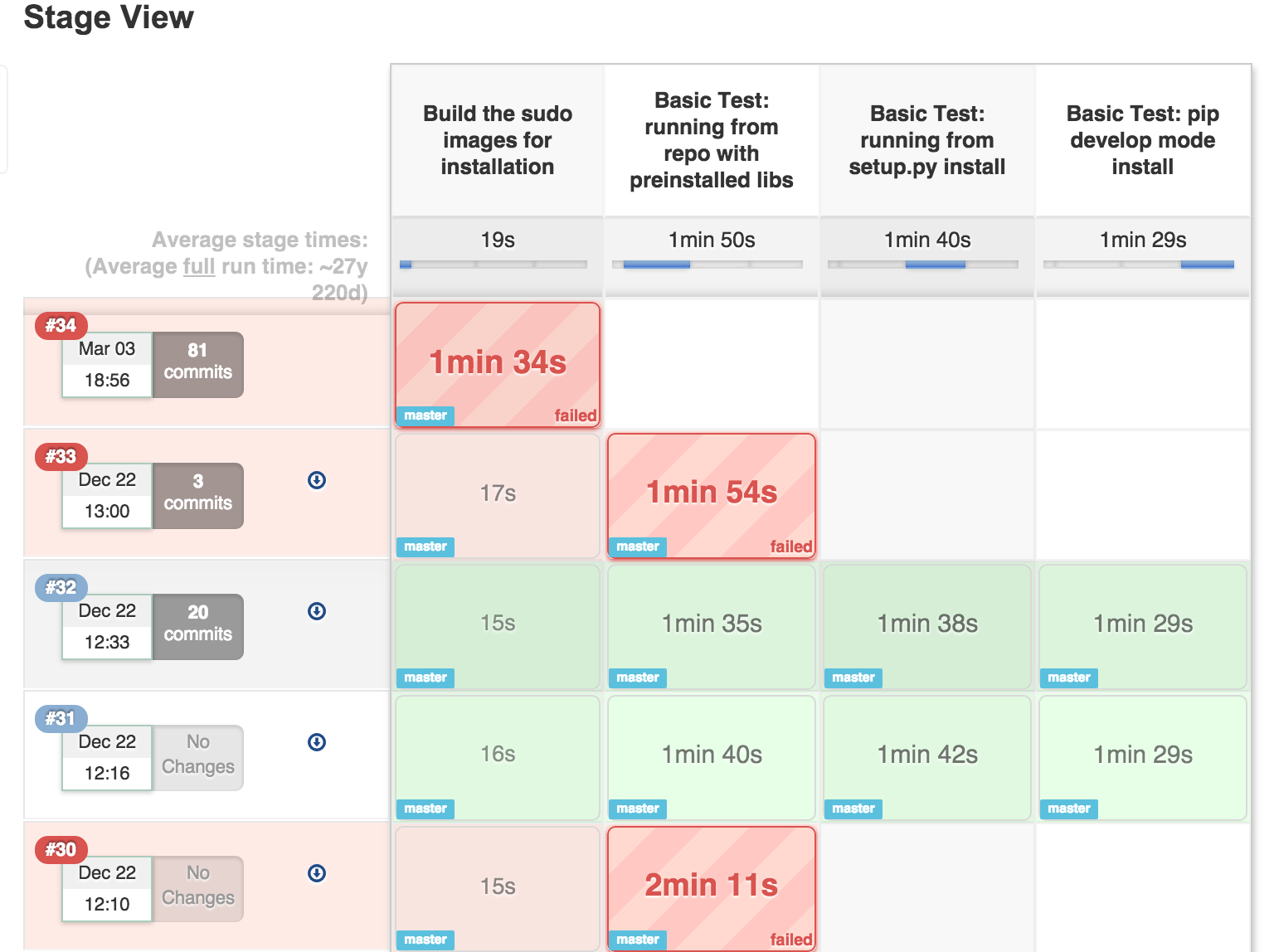 For a full overview of what Jenkins 2 adds to Jenkins, please refer to Jenkins 2 Overview.

Also, the full changelog is available from Jenkins website.

For apt-get based systems such as Ubuntu

A jenkins user is now created and by default Jenkins will be running on port 8080.

For RPM Based distributions such as Red Hat Enterprise Linux (RHEL), CentOS, Fedora or Scientific Linux

To download the repository file for the stable version:

Or if you want the latest weekly releases:

Jenkins requires java in order to run, to install it:

instead of the default

Remove the default settings for Nginx

Copy the following code into the newly created jenkins file.

Create a symbolic link between sites-available and sites-enabled:

Jenkins will now be accessible from port 80.

The client JAR must be the CLI JAR file, not the same JAR/WAR that runs Jenkins itself. Unique IDs can be found on a plugins respective page on the Jenkins CLI wiki (https://wiki.jenkins-ci.org/display/JENKINS/Plugins)

Move Jenkins from one PC to another

You might not need this, but I had to

Configure a project in Jenkins

Here we will be checking out the latest copy of our project's code, run the tests and will make the application live.To achieve that, follow below steps:

So above we have configured a basic project in Jenkins which will trigger the build at every minute for change in your git repository. Note: To setup the complex project, you may have to install some plugins in Jenkins.

Jenkins full Introduction in one place

Jenkins is an open source continuous integration tool written in Java. The project was forked from Hudson after a dispute with Oracle.

In a nutshell, Jenkins is the leading open source automation server. Built with Java, it provides hundreds of plugins to support building, testing, deploying and automation for virtually any project.

Features : Jenkins offers the following major features out of the box, and many more can be added through plugins:

Easy installation: Just run java -jar jenkins.war, deploy it in a servlet container. No additional install, no database. Prefer an installer or native package? We have those as well. Easy configuration: Jenkins can be configured entirely from its friendly web GUI with extensive on-the-fly error checks and inline help. Rich plugin ecosystem: Jenkins integrates with virtually every SCM or build tool that exists. View plugins. Extensibility: Most parts of Jenkins can be extended and modified, and it's easy to create new Jenkins plugins. This allows you to customize Jenkins to your needs. Distributed builds: Jenkins can distribute build/test loads to multiple computers with different operating systems. Building software for OS X, Linux, and Windows? No problem.

JENKINS_HOME directory Jenkins needs some disk space to perform builds and keep archives. You can check this location from the configuration screen of Jenkins. By default, this is set to ~/.jenkins, but you can change this in one of the following ways: Set "JENKINS_HOME" environment variable to the new home directory before launching the servlet container. Set "JENKINS_HOME" system property to the servlet container. Set JNDI environment entry "JENKINS_HOME" to the new directory. See the container specific documentation collection for more about how to do this for your container. You can change this location after you've used Jenkins for a while, too. To do this, stop Jenkins completely, move the contents from old JENKINS_HOME to the new home, set the new JENKINS_HOME, and restart Jenkins. JENKINS_HOME has a fairly obvious directory structure that looks like the following:

Creating a new build job in Jenkins is simple: just click on the “New Job” menu item on the Jenkins dashboard. Jenkins supports several different types of build jobs, which are presented to you when you choose to create a new job

Freestyle build jobs are general-purpose build jobs, which provides a maximum of flexibility.

Maven project The “maven2/3 project” is a build job specially adapted to Maven projects. Jenkins understands Maven pom files and project structures, and can use the information gleaned from the pom file to reduce the work you need to do to set up your project.

Orchestrates long-running activities that can span multiple build slaves. Suitable for building pipelines and/or organizing complex activities that do not easily fit in free-style job type.

Jenkins can be used to perform the typical build server work, such as doing continuous/official/nightly builds, run tests, or perform some repetitive batch tasks. This is called "free-style software project" in Jenkins. Setting up the project Go to Jenkins top page, select "New Job", then choose "Build a free-style software project". This job type consists of the following elements: optional SCM, such as CVS or Subversion where your source code resides. optional triggers to control when Jenkins will perform builds. some sort of build script that performs the build (ant, maven, shell script, batch file, etc.) where the real work happens optional steps to collect information out of the build, such as archiving the artifacts and/or recording javadoc and test results. optional steps to notify other people/systems with the build result, such as sending e-mails, IMs, updating issue tracker, etc.

Builds for Non-Source Control Projects There is sometimes a need to build a project simply for demonstration purposes or access to a SVN/CVS repository is unavailable. By choosing to configure the project  as "None" under "Source Code Management" you will have to:

When a Jenkins job executes, it sets some environment variables that you may use in your shell script, batch command, Ant script or Maven POM . See the list of variable by clicking on ENVIRONMENT_VARIABLE

Builds in Jenkins can be triggered periodically (on a schedule, specified in configuration), or when source changes in the project have been detected, or they can be automatically triggered by requesting the URL:

This allows you to hook Jenkins builds into a variety of setups. For more information (in particular doing this with security enabled), see Remote access API.

Alternatively, instead of polling on a fixed interval, you can use a URL trigger (described above), but with /polling instead of /build at the end of the URL. This makes Jenkins poll the SCM for changes rather than building immediately. This prevents Jenkins from running a build with no relevant changes for commits affecting modules or branches that are unrelated to the job. When using /polling the job must be configured for polling, but the schedule can be empty.

If you have the root account of your system and you are using sendmail, I found it the easiest to tweak /etc/aliases and add the following entry: jenkins-foo: "|/bin/wget -o /dev/null

and then run "newaliases" command to let sendmail know of the change. Whenever someone sends an e-mail to "[email protected]", this will trigger a new build. See this for more details about configuring sendmail. Builds by e-mail (qmail) With qmail, you can write /var/qmail/alias/.qmail-jenkins as follows: |/bin/wget -o /dev/null http://YOURHOST/jenkins/job/PROJECTNAME/build"

Jenkins parses Maven POMs to obtain much of the information needed to do its work. As a result, the amount of configuration is drastically reduced.

This project type can automatically provide the following features:

Archive artifacts produced by a build

Trigger jobs for projects which are downstream dependencies

Deploy your artifacts to a Maven repository

This process takes versions into account, so you can have multiple versions/branches of your project on the same Jenkins and it will correctly determine dependencies. Note that dependency version ranges are not supported, see [https://issues.jenkins-ci.org/browse/JENKINS-2787][1] for the reason.

How to Use It

First, you must configure a Maven installation (this step can be skipped if you are using [email protected]). This can be done by going to the system configuration screen (Manage Jenkins-> Configure System). In the “Maven Installations” section, 1) click the Add button, 2) give it a name such as “Maven 3.0.3” and then 3) choose the version from the drop down.

Now, Jenkins will automatically install this version any time it’s needed (on any new build machines, for example) by downloading it from Apache and unzipping it.

Now you need to configure of your job

You can also define the custome path for the same.

Build your project by clicking on build now and click on the progress bar in the left hand “Build Executor Status” to watch jenkins install Maven, checkout your project, and build it using maven.

Useful for trouble-shooting, diagnostics or batch updates of jobs Jenkins provides a script console which gives you access to all Jenkins internals. These scripts are written in Groovy and you'll find some samples of them in this page.

Here we will be creating a Groovy pipeline in Jenkins 2 to do the following steps :

Here are the steps we will :

Here you go, you should now be able to compile and test your first Jenkins project using Jenkins 2 Groovy pipeline.