If we want to look at a scene as if we had photographed it with a camera, we must first define some things:

A definition of this data in C++ and in Python may look like this:

In order to take all this information into consideration when drawing a scene, a projection matrix and a view matrix are usually used. In order to arrange the individual parts of a scene in the scene, model matrices are used. However, these are mentioned here only for the sake of completeness and will not be dealt with here.

After we have filled the data structures above with the corresponding data, we have to translate them into the appropriate matrices. In the OGL compatibility mode, this can be done with the gluLookAt and gluPerspective functions that set the built in uniforms gl_ModelViewMatrix, gl_NormalMatrix, and gl_ModelViewProjectionMatrix. In OGL 3.1 and GLSL #version 150 the built in uniforms were removed, because the entire fixed-function matrix stack became deprecated. If we want to use OGL high level shader with GLSL version 330 or even higher we have to define and set the matrix uniforms our self (Apart from the use of GLSL compatibility keyword).

Set up the perspective - Projection matrix

All we can see from the scene is within a 4-sided pyramid. The top of the pyramid is the eye position. The 4 sides of the pyramid are defined by the filed of view (fov_y) and the aspect ratio (vp[0]/vp[1]). The projection matrix has to map the points from inside the pyramid to the NDC defined by the points (-1.0, -1.0, -1.0) and (1.0, 1.0, 1.0). At this point our pyramid is infinite, it has no end in depth and we can not map an infinite space to a finite one. For this we now need the near plane and the far plane, they transform the pyramid into a frustum by cutting the top and limiting the pyramid in the depth. The near plane and the far plane have to be chosen in such a way that they include everything that should be visible from the scene.

The mapping from the points within a frustum to the NDC is pure mathematics and can be generally solved. The development of the formulas were often discussed and repeatedly published throughout the web. Since you can not insert a LaTeX formula into a Stack Overflow documentation this is dispensed with here and only the completed C++ and Python source code is added. Note that the eye coordinates are defined in the right-handed coordinate system, but NDC uses the left-handed coordinate system. The projection matrix is calculated from, the field of view fov_y, the aspect ratio vp[0]/vp[1], the near plane nearand the far plane far.

Set up the look at the scene - View matrix

In the scene, the X axis points to the east, the Y axis to the north, and the Z axis to the top. 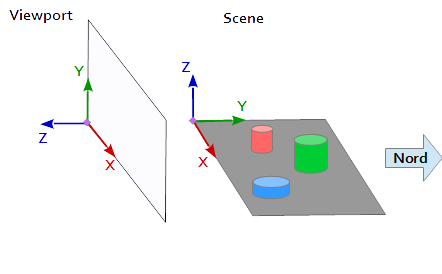 Each point and each vector from the reference system of the scene must therefore be converted first into viewport coordinates. This can be done by some swapping and inverting operations in the the scalar vectors.

To setup a view matrix the position pos, the target target and the up vector up have to be mapped into the viewport coordinate system, as described above. This give the 2 points p and t and the vector u, as in the following code snippet. The Z axis of the view matrix is the inverse line of sight, which is calculated by p - t. The Y axis is the up vector u. The X axis is calculated by the cross product of Y axis and Z axis. For orthonormalising the view matrix, the cross product is used a second time, to calculate the Y axis from the Z axis and the X axis (Of course the Gram-Schmidt orthogonalization would work just as well). At the end, all 3 axles must be normalized and the eye position pos has to be set as th origin of the view matrix.

The code below defines a matrix that exactly encapsulates the steps necessary to calculate a look at the scene:

The matrices are finally written in uniforms and used in the vertex shader to transform the model positions.

In the vertex shader, one transformation after the other is performed.

The fragment shader is listed here only for the sake of completeness. The work was done before.

After the shader are compiled and liked, the matrices can bound to the uniform variables.

In addition, I have added the entire code dump of a Python example (To add the C ++ example would unfortunately exceed the limit of 30000 characters). In this example, the camera moves elliptically around a tetrahedron at a focal point of the ellipse. The viewing direction is always directed to the tetraeder.

To run the Python script NumPy must be installed.