A basic plot is created by calling plot(). Here we use the built-in cars data frame that contains the speed of cars and the distances taken to stop in the 1920s. (To find out more about the dataset, use help(cars)). 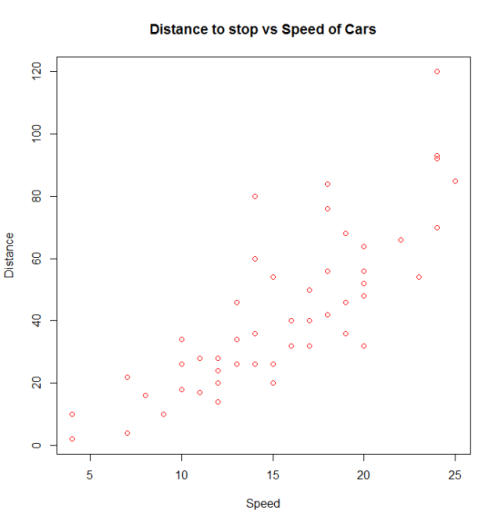 We can use many other variations in the code to get the same result. We can also change the parameters to obtain different results. 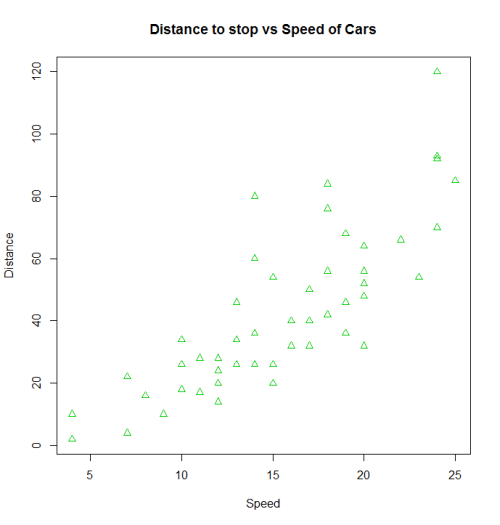 Additional features can be added to this plot by calling points(), text(), mtext(), lines(), grid(), etc. 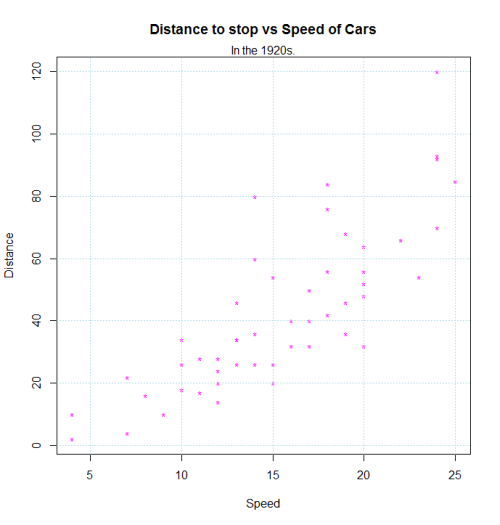 matplot is useful for quickly plotting multiple sets of observations from the same object, particularly from a matrix, on the same graph.

Here is an example of a matrix containing four sets of random draws, each with a different mean.

One way to plot all of these observations on the same graph is to do one plot call followed by three more points or lines calls. 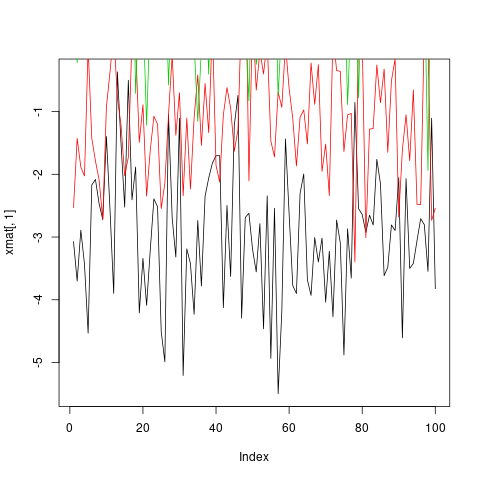 However, this is both tedious, and causes problems because, among other things, by default the axis limits are fixed by plot to fit only the first column.

Much more convenient in this situation is to use the matplot function, which only requires one call and automatically takes care of axis limits and changing the aesthetics for each column to make them distinguishable. 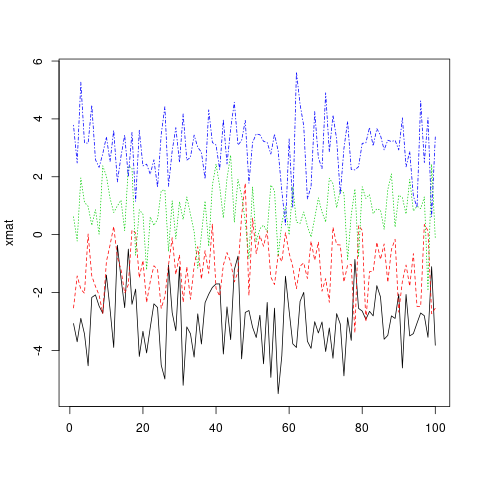 Note that, by default, matplot varies both color (col) and linetype (lty) because this increases the number of possible combinations before they get repeated. However, any (or both) of these aesthetics can be fixed to a single value... 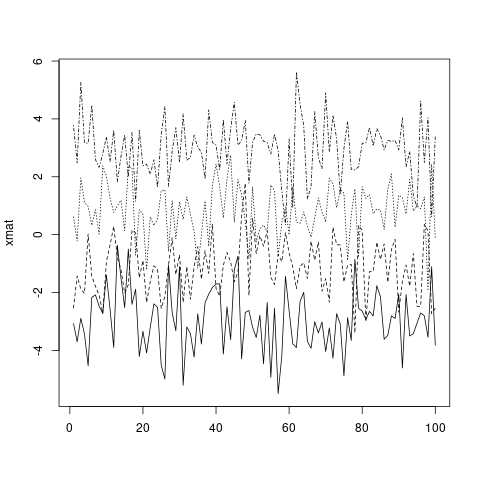 ...or a custom vector (which will recycle to the number of columns, following standard R vector recycling rules). 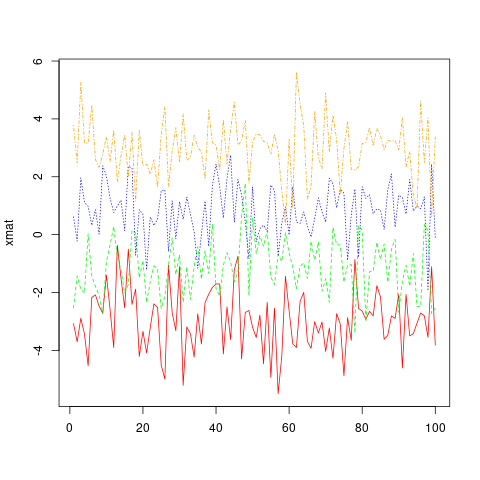 Standard graphical parameters, including main, xlab, xmin, work exactly the same way as for plot. For more on those, see ?par.

Like plot, if given only one object, matplot assumes it's the y variable and uses the indices for x. However, x and y can be specified explicitly. 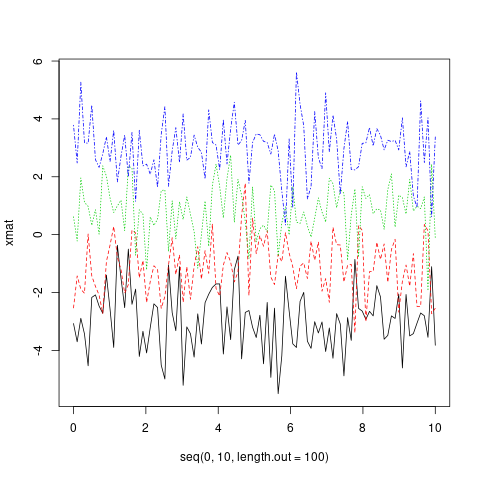 In fact, both x and y can be matrices. 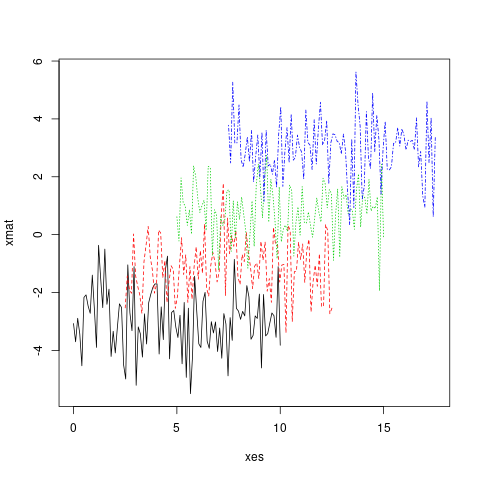 Histograms allow for a pseudo-plot of the underlying distribution of the data. 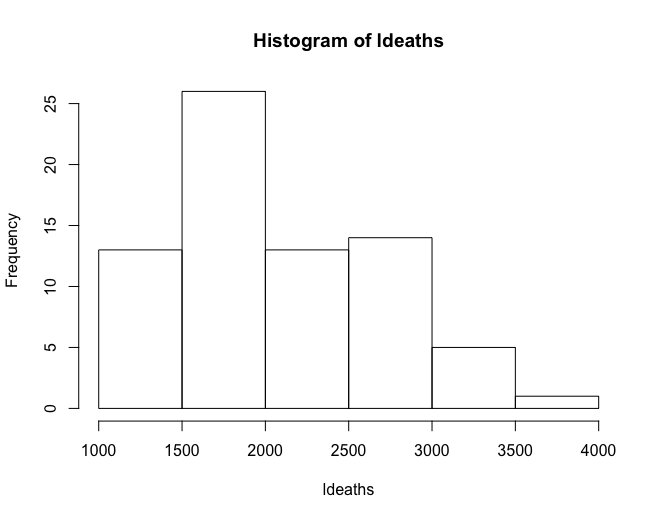 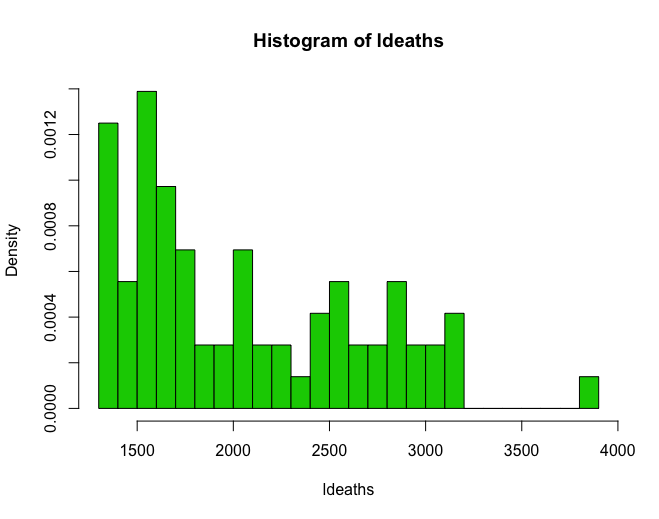 It's often useful to combine multiple plot types in one graph (for example a Barplot next to a Scatterplot.) R makes this easy with the help of the functions par() and layout().

par uses the arguments mfrow or mfcol to create a matrix of nrows and ncols c(nrows, ncols) which will serve as a grid for your plots. The following example shows how to combine four plots in one graph: 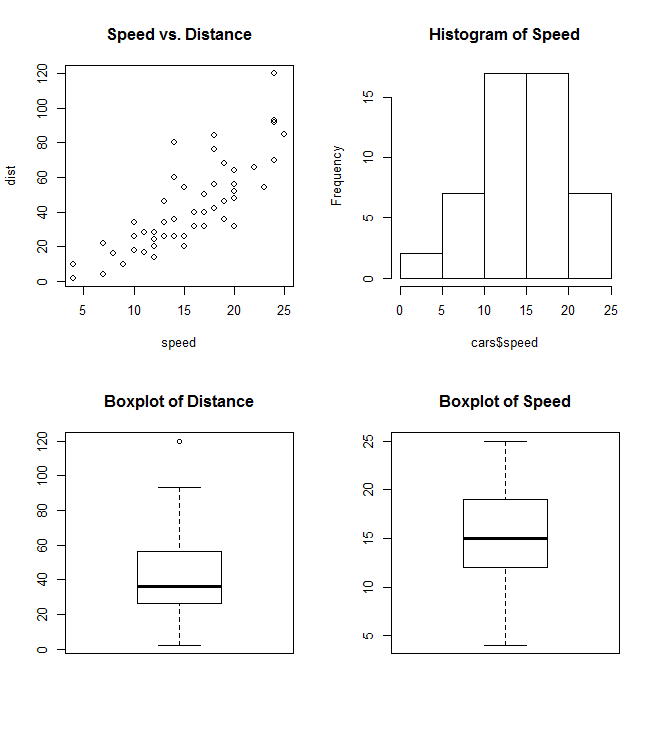 The layout() is more flexible and allows you to specify the location and the extent of each plot within the final combined graph. This function expects a matrix object as an input: 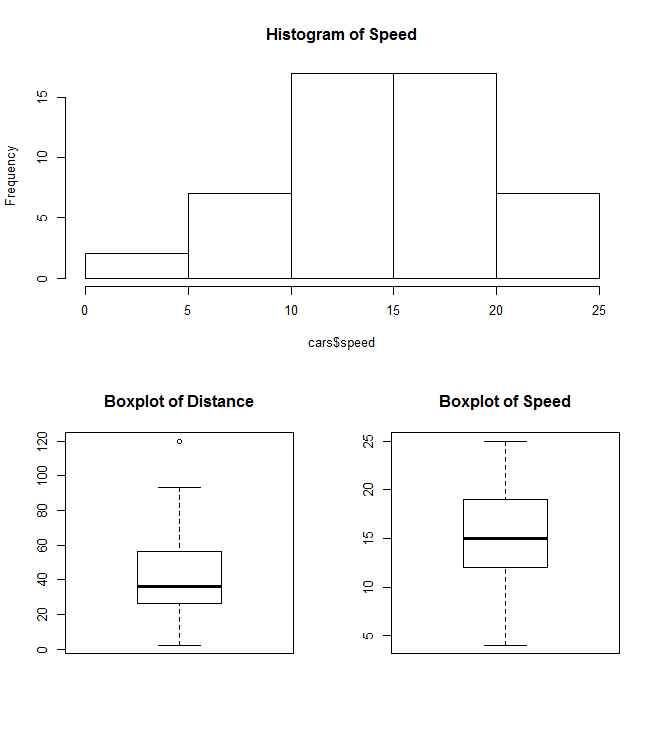 A very useful and logical follow-up to histograms would be to plot the smoothed density function of a random variable. A basic plot produced by the command 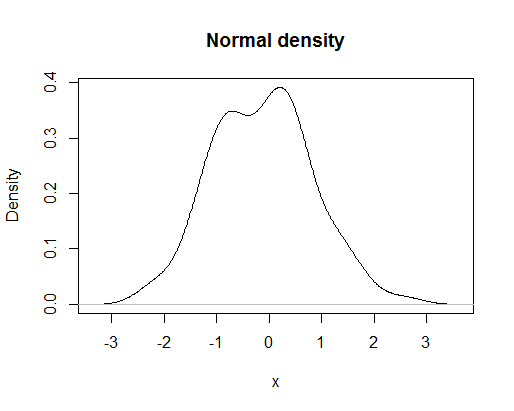 You can overlay a histogram and a density curve with 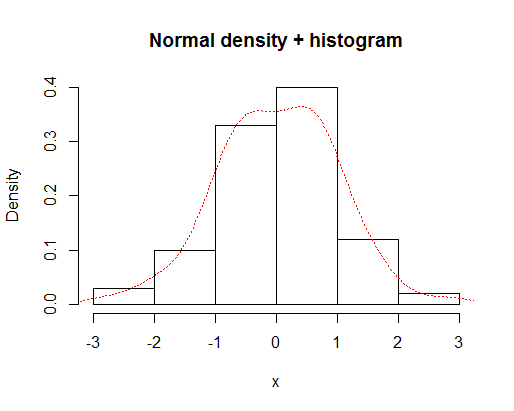 A very useful and logical follow-up to histograms and density plots would be the Empirical Cumulative Distribution Function. We can use the function ecdf() for this purpose. A basic plot produced by the command 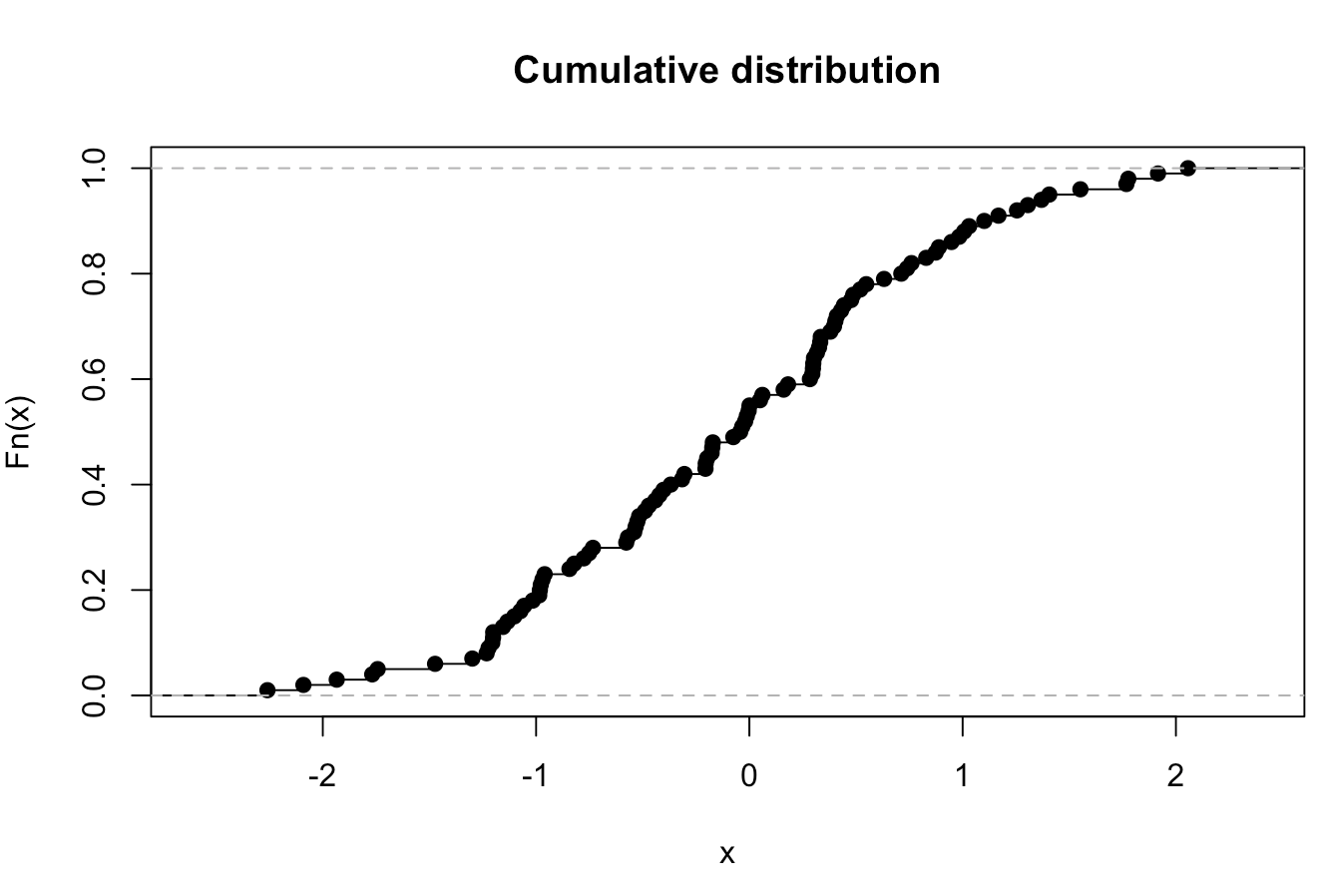 You have two vectors and you want to plot them.

If you want to make a plot which has the y_values in vertical axis and the x_valuesin horizontal axis, you can use the following commands:

You can type ?plot() in the console to read about more options.

You have some variables and you want to examine their Distributions

First we have to generate data with frequencies, for example :