We will use the built in tooth growth dataset. We are interested in whether there is a statistically significant difference in tooth growth when the guinea pigs are given vitamin C vs orange juice.

After we read in the CSV, we define the function

This function takes two vectors, and shuffles their contents together, then performs the function testStat on the shuffled vectors. The result of teststat is added to trials, which is the return value.

It does this N = 10^5 times. Note that the value N could very well have been a parameter to the function.

This leaves us with a new set of data, trials, the set of means that might result if there truly is no relationship between the two variables.

Now to define our test statistic:

Let's see what our observation looks like on a histogram of our test statistic. 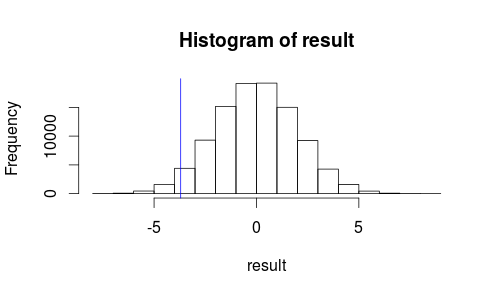 It doesn't look like our observed result is very likely to occur by random chance...

We want to calculate the p-value, the likeliehood of the original observed result if their is no relationship between the two variables.

Let's break that down a bit:

With TRUE every time the value of result is greater than or equal to the observedMean.

The function mean will interpret this vector as 1 for TRUE and 0 for FALSE, and give us the percentage of 1's in the mix, ie the number of times our shuffled vector mean difference surpassed or equalled what we observed.

Finally, we multiply by 2 because the distribution of our test statistic is highly symmetric, and we really want to know which results are "more extreme" than our observed result.

All that's left is to output the p-value, which turns out to be 0.06093939. Interpretation of this value is subjective, but I would say that it looks like Vitamin C promotes tooth growth quite a lot more than Orange Juice does.