tensorflow Getting started with tensorflow

This section provides an overview of what tensorflow is, and why a developer might want to use it.

As of Tensorflow version 1.0 installation has become much easier to perform. At minimum to install TensorFlow one needs pip installed on their machine with a python version of at least 2.7 or 3.3+.

If that succeeded without error then you have tensorflow installed on your machine.


*Be aware this references the master branch one can change this on the link above to reference the current stable release.)

Tensorflow is more than just a deep learning framework. It is a general computation framework to perform general mathematical operations in a parallel and distributed manner. An example of such is described below.

A basic statistical example that is commonly utilized and is rather simple to compute is fitting a line to a dataset. The method to do so in tensorflow is described below in code and comments.

The main steps of the (TensorFlow) script are:

Tensorflow works on principle of dataflow graphs. To perform some computation there are two steps:

Representation: Like any directed graph a Tensorflow graph consists of nodes and directional edges.

Node: A Node is also called an Op(stands for operation). An node can have multiple incoming edges but single outgoing edge.

Edge: Indicate incoming or outgoing data from a Node. In this case input(s) and output of some Node(Op).

Whenever we say data we mean an n-dimensional vector known as Tensor. A Tensor has three properties: Rank, Shape and Type

Execution: Even though a graph is constructed it is still an abstract entity. No computation actually occurs until we run it. To run a graph, we need to allocate CPU resource to Ops inside the graph. This is done using Tensorflow Sessions. Steps are:

An incoming edge on an Op is like a dependency for data on another Op. Thus when we run any Op, all incoming edges on it are traced and the ops on other side are also run. 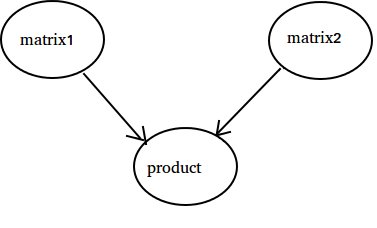 In this example we use Tensorflow to count to 10. Yes this is total overkill, but it is a nice example to show an absolute minimal setup needed to use Tensorflow

The important thing to realize here is that state, one, addition, and update don't actually contain values. Instead they are references to Tensorflow objects. The final result is not state, but instead is retrieved by using a Tensorflow to evaluate it using sess.run(state)

This example is from https://github.com/panchishin/learn-to-tensorflow . There are several other examples there and a nice graduated learning plan to get acquainted with manipulating the Tensorflow graph in python.