tkinter Getting started with tkinter

Tkinter isn't the only GUI library for python, but it is the one that comes standard. Additional GUI libraries that can be used with python include wxPython, PyQt, and kivy.

Tkinter's greatest strength is its ubiquity and simplicity. It works out of the box on most platforms (linux, OSX, Windows), and comes complete with a wide range of widgets necessary for most common tasks (buttons, labels, drawing canvas, multiline text, etc).

As a learning tool, tkinter has some features that are unique among GUI toolkits, such as named fonts, bind tags, and variable tracing.

Differences between python 2 and 3

Tkinter is largely unchanged between python 2 and python 3, with the major difference being that the tkinter package and modules were renamed.

In python 2.x, the tkinter package is named Tkinter, and related packages have their own names. For example, the following shows a typical set of import statements for python 2.x:

Although functionality did not change much between python 2 and 3, the names of all of the tkinter modules have changed. The following is a typical set of import statements for python 3.x:

For Debian versions of Linux you have to install it manually by using the following commands.

To verify if you have successfully installed Tkinter, open your Python console and type the following command:

You have successfully installed Tkinter, if the above command executes without an error.

To check the Tkinter version, type the following commands in your Python REPL:

Note: Importing Tkinter as tk is not required but is good practice as it helps keep things consistent between version.

First, we must import tkinter, this will vary based on version (see remarks section about "Differences between Python 2 and 3")

In Python 3 the module tkinter has a lowercase t:

In Python 2 the module Tkinter has a uppercase T:

Using as tk isn't strictly necessary but we will use it so the rest of this example will work the same for both version.

now that we have the tkinter module imported we can create the root of our application using the Tk class:

This will act as the window for our application. (note that additional windows should be Toplevel instances instead)

Now that we have a window, let's add text to it with a Label

This will open and run the application until it is stopped by the window being closed or calling exiting functions from callbacks (discussed later) such as root.destroy().

Putting it all together: 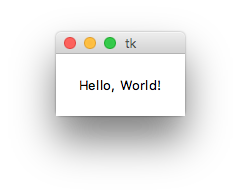