wxpython Getting started with wxpython

Simply put wxPython is a set of bindings to the wxWidgets C++ Cross Platform GUI library.

Ok what is wxWidgets

The wxWidgets library provides a free, gratis & open source, set of abstractions for the various GUI elements so that the native controls are still used, where available, maintaining the native look, feel & speed. As such it provides an abstraction for GUI creation and a number of other utilities in a platform that lets developers create applications for Windows, Mac OS X, Linux and other platforms using a single code base. wxWidgets was started in 1992 and you can see a detailed history here. The wxWidgets library is distributed under the wxWindows License, which is based on the L-GPL but with an exception clause. The exception clause allows you to link your application either dynamically or statically to wxWidgets without the requirement to distribute the source for your your own application. In other words, you can use wxWidgets for either free or commercial projects, at no cost. The license encourages you to give back enhancements you make to the wxWidgets library itself.

Note that some of these facilities, e.g. threading, are not actually GUI related but provide a useful cross platform abstraction so that, in the case of threading for example, one set of application code will work on any supported platform.

For many years the wxWidgets library, produced 4 separate builds, in addition to debug builds from one set of source code, static and dynamic libraries built for both ASCII and Unicode. It is usually available pre-built in the most common variants and as source code to build with the various options for the target environment and with the developers C++ tool chain with numerous tool chains being supported.

The python bindings for this library and some additions form wxPython.

Back to What Is wxPython, (what does it give me)?

wxPython gives a developer a way of benefiting from a cross platform GUI library, with a clear licence, while also giving the benefits of Python. Like wxWidgets and Python wxPython is free, gratis & open source, and available for use and distribution in both free and commercial projects without a resulting requirement to distribute your source code.

Note that where python itself provides a cross platform mechanism for implementing the utility functions of wxWidgets, threading again being a good example, it is intentionally omitted from wxPython.

wxPython also has a very large suite of demonstrations that can be run, tested and edited from within the Documents and Demo package.

For many years, as with wxWidgets, developers had to choose between ASCII and Unicode builds as well as needing a build for their specific version of python as well as the 32/64 bit options. As of about wxPython 2.8.9 the ASCII only build of wxPython has been dropped so Unicode support is always available.

Since wxPython 3.0.0 there have existed the released "Classic" build of wxPython and a Phoenix currently unreleased build. The classic build tends to lag behind the wxWidgets builds of the same numbers and the documentation package is the C++ - it is available for download for various platforms, (see Installation of Classic), in the case of windows as an executable installer. The Phoenix bindings, being largely automatically generated, should follow more closely on the wxWidgets builds and also include wxPython specific documentation - it is build-able from source or nightly builds as wheels can be obtained using pip, (see Installation of Phoenix).

In wxPython but not wxWidgets

wxPython extends the wxWidgets library with a number of features, the following are just a few, that are not available in wxWidgets:

The wxPython demo with all the branches closed: 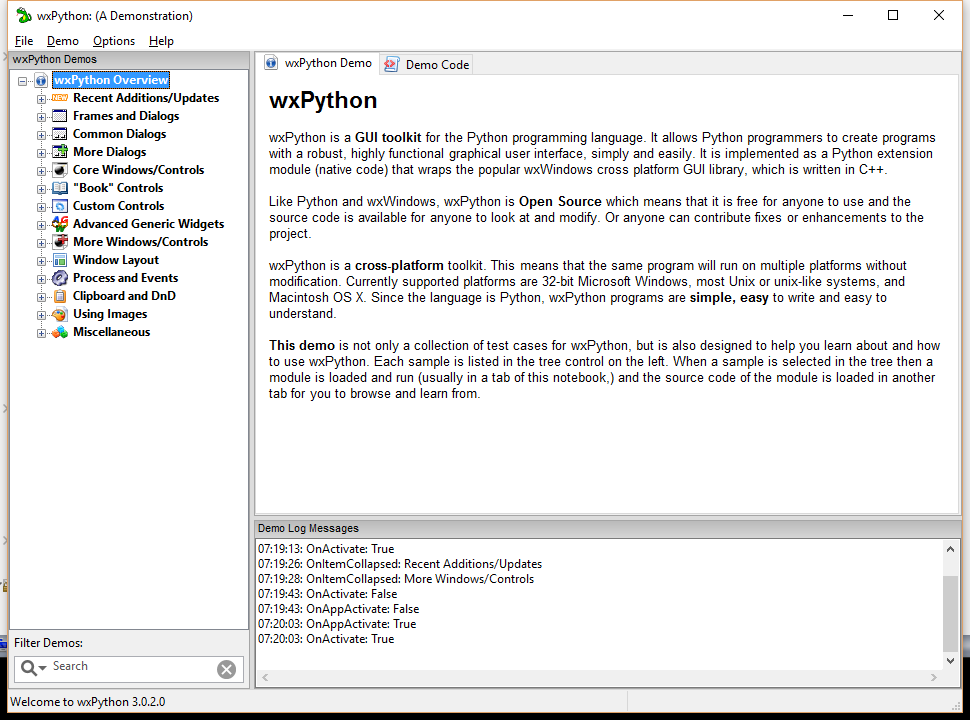 One of the recent additions: 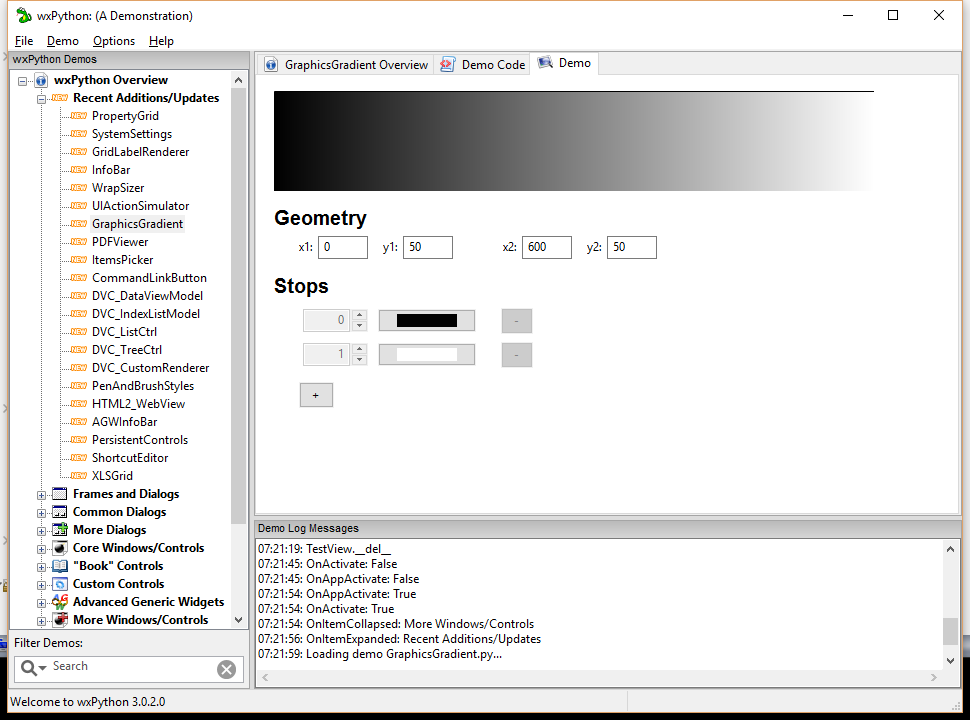 One of the AGW, (Advanced Generic Widgets): 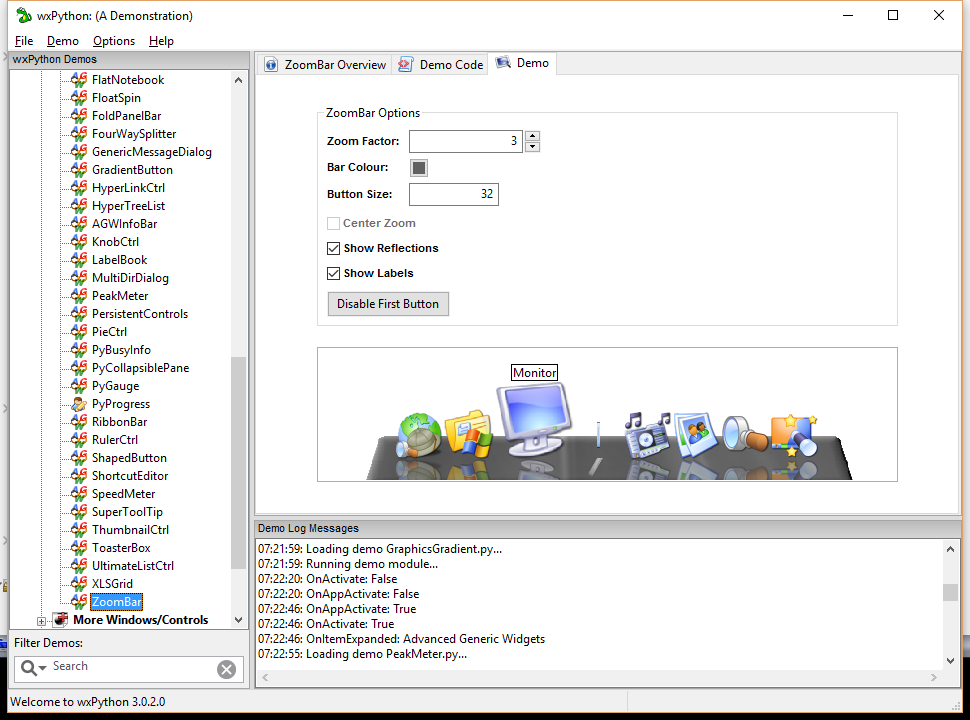 wxPython Phoenix is the latest version of wxPython, (currently Sept 2016 without an official release). It supports both Python 2 and Python 3. You can download a snapshot build (i.e. a Python wheel) for your platform and Python version here.

wxPython Phoenix utilizes a largely automated mechanism for generating both the python bindings for the wxWidgets library and the documentation. Phoenix wxPython documentation is specifically generated for itself using Sphinx. This increases clarity as opposed to C++ documentation of the classic build, which includes many overloads that are not available in wxPython.

You can use pip to install the Phoenix version of wxPython. Here is the recommended method currently:

When you use this command, pip will also install wxWidgets. This complex pip command will likely become 'pip install wxpython' when Phoenix is officially released.

Note: wxPython Phoenix is currently in beta and doesn't have all the widgets that the Classic version has.

wxPython Classic is a Python 2 build of the wxPython library. Generation of the python bindings require a large number of manual interventions and the documentation is simply the wxWidgets documentation which contains some annotations on wxPython mechanisms as such there is normally a delay of weeks to months between a new release of wxWidgets and the matching release of wxPython.

Go to the download page on the wxPython website to see if there is already a version of wxPython that you can download for your platform.

There are installers for Python 2.6 and 2.7 for 32-bit and 64-bit Windows platforms on the website. Just download one of these and run them to install it.

Note: Make sure you download a wxPython installer for the right Python you have installed. For example, if you have Python 2.7 32-bit, then you want a wxPython 32-bit installer

If you have a Mac with a version of OSX less than 10.5, then you will want the Carbon build.

The first thing to check if your Linux platform's package manager (i.e. yum, apt-get, etc) to see if it has a version of wxPython that you can install. Unfortunately, a lot of Linux packages for wxPython are for version 2.8.12.1 instead of 3.0.2.0. If your package manager doesn't have the latest version, you will probably have to build it yourself.

There are build instructions for 3.0.2.0-Classic here

A simple way to create a Hello World program: 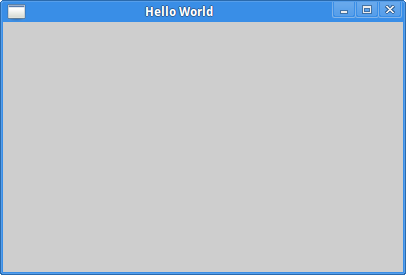 A more typical example would be to subclass wx.Frame:

This can also be rewritten to use Python's super:

What is a wxPython Release Series?

Because of the binary compatibility issues, the latest development version of wxWidgets/wxPython can often be less buggy than the latest version of the last stable release series. However there is the trade-off that the APIs may be changing or evolving between versions in the development series.

How do the version numbers work?

For releases wxPython uses a 4 component version number. While this looks a lot like how version numbers are used in other Open Source projects, there are a few subtle differences. So for some release A.B.C.D you can deduce the following:

Because of this there can be quite large changes between one stable series to the next (say 2.4 to 2.6) and this often throws people off because in other projects changes of that magnitute would have caused the first component of the version number to change. Instead you should think of the combination of A.B as being the major number of the version.