Scope is the context in which variables live and can be accessed by other code in the same scope. Because JavaScript can largely be used as a functional programming language, knowing the scope of variables and functions is important as it helps to prevent bugs and unexpected behavior at runtime.

Difference between var and let

(Note: All examples using let are also valid for const)

var is available in all versions of JavaScript, while let and const are part of ECMAScript 6 and only available in some newer browsers.

var is scoped to the containing function or the global space, depending when it is declared:

That means it "escapes" if statements and all similar block constructs:

By comparison, let is block scoped:

Note that i and j are only declared in the for loop and are therefore undeclared outside of it.

There are several other crucial differences:

In the top scope (outside any functions and blocks), var declarations put an element in the global object. let does not:

Declaring a variable twice using var doesn't produce an error (even though it's equivalent to declaring it once):

With let, this produces an error:

The same is true when y is declared with var:

ReferenceError: i is not defined

Variables declared both with var and let are hoisted. The difference is that a variable declared with var can be referenced before its own assignment, since it gets automatically assigned (with undefined as its value), but let cannot–it specifically requires the variable to be declared before being invoked:

The area between the start of a block and a let or const declaration is known as the Temporal Dead Zone, and any references to the variable in this area will cause a ReferenceError. This happens even if the variable is assigned before being declared:

This concept of "capturing" scope is interesting because we can use and modify variables from an outer scope even after the outer scope exits. For example, consider the following:

This lets us do some interesting things, such as defining "private" variables that are visible only to a specific function or set of functions. A contrived (but popular) example:

Closures are also used to prevent global namespace pollution, often through the use of immediately-invoked function expressions.

Immediately-invoked function expressions (or, perhaps more intuitively, self-executing anonymous functions) are essentially closures that are called right after declaration. The general idea with IIFE's is to invoke the side-effect of creating a separate context that is accessible only to the code within the IIFE.

Suppose we want to be able to reference jQuery with $. Consider the naive method, without using an IIFE:

In the following example, an IIFE is used to ensure that the $ is bound to jQuery only in the context created by the closure:

See the canonical answer on Stackoverflow for more information on closures.

Hoisting is a mechanism which moves all variable and function declarations to the top of their scope. However, variable assignments still happen where they originally were.

For example, consider the following code:

The above code is the same as:

Note that due to hoisting the above undefined is not the same as the not defined resulting from running:

A similar principle applies to functions. When functions are assigned to a variable (i.e. a function expression), the variable declaration is hoisted while the assignment remains in the same place. The following two code snippets are equivalent.

The above code is the same as the next code snippet due to hoisting:

Here are some examples of what is and what isn't hoisting:

Initializing a variable can not be Hoisted or In simple JavaScript Hoists declarations not initialization.

For example: The below scripts will give different outputs.

This will give you an output of NaN. Since we are initializing the value of y, the JavaScript Hoisting is not happening, so the y value will be undefined. The JavaScript will consider that y is not yet declared.

So the second example is same as of below.

This will give you an output of NaN. 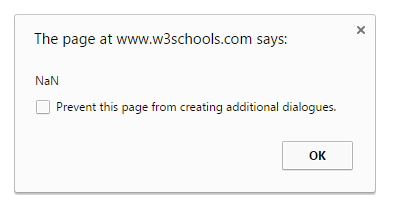 Using let in loops instead of var (click handlers example)

Let's say we need to add a button for each piece of loadedData array (for instance, each button should be a slider showing the data; for the sake of simplicity, we'll just alert a message). One may try something like this:

But instead of alerting, each button will cause the

error. This is because the scope of i is the global scope (or a function scope) and after the loop, i == 3. What we need is not to "remember the state of i". This can be done using let:

An example of loadedData to be tested with this code:

A fiddle to illustrate this

Invoking a function as a method of an object the value of this will be that object.

We can now invoke print as a method of obj. this will be obj

Invoking a function as an anonymous function, this will be the global object (self in the browser).

In ECMAScript 5's strict mode, this will be undefined if the function is invoked anonymously.

When using arrow functions this takes the value from the enclosing execution context's this (that is, this in arrow functions has lexical scope rather than the usual dynamic scope). In global code (code that doesn't belong to any function) it would be the global object. And it keeps that way, even if you invoke the function declared with the arrow notation from any of the others methods here described.

See how this inherits the context rather than referring to the object the method was called on.

Apply and Call syntax and invocation.

The apply and call methods in every function allow it to provide a custom value for this.

You might notice that the syntax for both the invocations used above are the same. i.e. The signature looks similar.

But there is a small difference in their usage, since we are dealing with functions and changing their scopes, we still need to maintain the original arguments passed to the function. Both apply and call support passing arguments to the target function as follows:

Notice that apply allows you to pass an Array or the arguments object (array-like) as the list of arguments, whereas, call needs you to pass each argument separately.

These two methods give you the freedom to get as fancy as you want, like implementing a poor version of the ECMAScript's native bind to create a function that will always be called as a method of an object from an original function.


The bind function has a lot going on

The bind method of every function allows you to create new version of that function with the context strictly bound to a specific object. It is specially useful to force a function to be called as a method of an object.